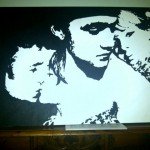 The title of this piece may seem trite to some and a well used “catch phrase” to others but the truth  is, the longer I’m in this profession the more overwhelming the evidence that speaks to this being, perhaps, the one universal truth about our role as educators. Two recent experiences brought this home once more.

I have to admit that high school reunions are not my cup of tea – at least as far as attending with former classmates – and I have passed on being a participant at any of them. However, I am always honored to attend when former students extend an invitation to be a part of their event. The most recent one was another chance to catch up with a wide range of students and see the growth that has occurred over the last two decades. It’s always a treat to hear a positive recollection or mention of support and I continue to be amazed at how a seemingly innocent and unintentional act on my part was significant for the recipient. It reminded me of the Chinese proverb that states “the one that plants the tree rarely gets to enjoy its shade”, but in this case I did get to enjoy the positive outcomes. The second event was more personal as my youngest daughter got married to her high school boyfriend. My new son-in-law also happens to be a former student that I suspended, and the story gets better. I was honored to be asked to be the Master of Ceremonies at the reception and my first question to the assembled crowd was “How many of you spent time in my office?” More than a third of the crowd shot their hands up including most of the bridesmaids and groomsmen. The best man got a big laugh when he mentioned how shocked everyone was to hear the groom was marrying the Principal’s daughter. Fortunately, grade nine is not terminal. The kids I had to spend lots of time with and work to effect changes in their lives were now adults exercising (mostly) good choices and were happy to share their updates with me. I was the beneficiary of some personal sharing and positive feedback.

Perhaps the most fascinating story came from Travis. My recollections were that he and I didn’t go much longer than a couple of days between his visits to my office during his three years at the middle school where I was Principal. Most of the time was spent trying to discern what he was interested in and what we could do to engage him more positively in school life. He had his share of baggage but also had a spark that just needed to be fanned before erupting into the flame that would add definition to his life. Travis surprised the happy couple with this painting:
He had created it from two photographs he had and the clarity of his work make it impossible to misidentify the couple. I was stunned by his creation as were most of the guests, and asked Travis about his talent. He confessed to only starting this “hobby” as he was thinking about a gift and that the completed work took him the better part of a day. I was chuckling to myself thinking how it might have been nice to know after one of our lengthy school talks that there was this brilliant light at the end of the tunnel. It was great to see him accept accolades (and orders for future paintings) with a confidence that belied any of the struggles he may have once experienced.

My mantra over the last number of years has been that every student is a success story waiting to be told. Helping them to discover and tell their story drives me forward. The rewards are numerous and the journeys incredibly satisfying.